Accidentally semi-popular on Wattpad: What I learned

My Publishing Advice column on Wattpad went over 100,000 reads last week, and I vaguely remember telling myself to throw out some analysis if that ever happened. But then I missed the moment when it did hit the number! Because what I’m learning is that Wattpad popularity is a bit like rolling downhill…at some point external forces take over and you’re rolling fast without even trying.

This is what my Publishing Advice stats look like, at 105K or so reads. (Just edited this number because it gained a thousand just in the time it took me to write this post.) 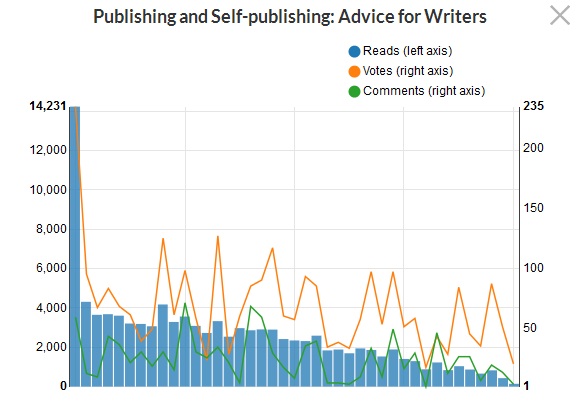 I have over a dozen stories on Wattpad, and “Publishing and Self-Publishing Advice for Writers” is by far the most popular one. It is also NOT part of my portfolio as an author. It’s actually more like my writing classes. I also take questions from the Wattpad users, so there are some topics that have never been discussed in any of my workshops.

The most popular Wattpad stories by Filipino authors have over 20 million reads though, so don’t be at all impressed by my numbers. (It’s also why I qualify in the title and say “semi-popular.”) There is popularity, and there is POPULARITY.

For comparison, I posted my actual work of fiction, in its entirety, on Wattpad also. This is what the stats look like, at just under 12K reads: 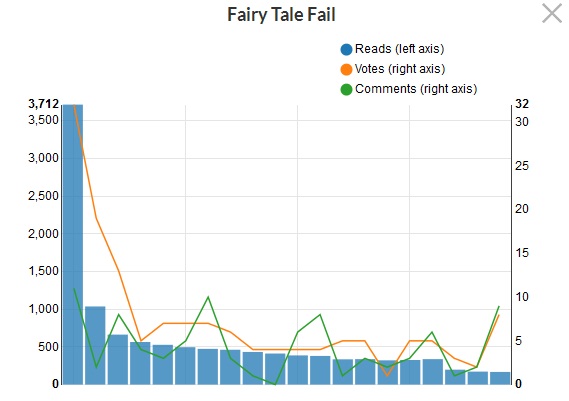 The first page contains the table of contents, and it’s the jumping off point for anyone who might have stumbled upon the story for the first time.

What I’ve learned about Wattpad popularity:

– Write in the language of the community you wish to reach. You’d think this was obvious, but as an author I’ve chosen to write in English, and that excludes some groups even as it includes others. By writing in Filipino, I reached an entirely new (and larger) audience in my own country. However, they’re reading the advice column, and not necessarily converting to the fiction. It helps me personally though, because I’m also an educator and trainer, along with being an author.

– Write something people want to read. Again, you’d think this was obvious, but writers usually go for what they want to write, instead of supplying what the reader community demands. Did they want yet another chick lit novel about a 20-something girl finding love and living life? Not necessarily. But they wanted help with writing and publishing.

Business and self-help book publishers know this though. People want help, all the time, for everything. But on some things, more than others. My most popular posts from the advice column were about topics that readers cared about, not necessarily what I wanted them to care about. Sometimes things would sweetly converge, but even with 41 posts up there are probably just a handful of those where I got the tone and timeliness just right.

– Be read by key people. I don’t want to say “popular” or “important” people — just the right people for the purpose you have in mind. I actually didn’t care about the numbers; I did this hoping that certain people would read it, and I think I reached them, so purpose fulfilled, I guess.

– Eventually your readers will find you. Patience is good too. Fairy Tale Fail is continuing to get reads, and is being added to reading lists, despite being complete (and the last 3 chapters are private, so only Wattpad users who follow me can see them). I like its performance though, so far. The dropoff from chapter to chapter is minimal. The last chapters are getting good votes, which tell me that I wrote that ending well. I’m proud enough of the book that I think if it stays there long enough, it will be read and enjoyed by more people.

– I don’t think every new Fairy Tale Fail (Wattpad edition) reader is a lost sale. Fairy Tale Fail has been available as an ebook since 2010, and over 10,000 copies of it have been downloaded so far. It’s been free, and as cheap as $0,99, and P175 in Philippine bookstores for a long time. If someone hasn’t chosen to get it that way, then it doesn’t hurt me if they find it and read it in this manner. Also I have like 10 other books that they can choose from, if they want to help me earn from this writing thing.