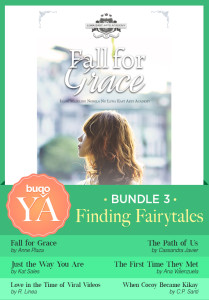 Buy these six YA romance stories at buqo! bit.ly/buqoya3

Last week was a busy one for me so I missed the actual tour for buqoYA’s Finding Fairytales bundle, but I’m making up for it now! Visit the other posts at Oops! I Read Again.

What inspired my story by Ana Valenzuela

At first I wanted to recreate some of the scenes from my own high school, experience. However, when I got into the Best Day Ever category, I couldn’t because the story I had in mind had a lot of my characters breaking the rules.

So, I tried to think of an event in my life wherein I was having fun all day and all night without any help of alcohol, caffeine, or whatsoever. Plus, Mina did say that the location is an integral part of the story, sort of like a character (although I admit, I failed in this part).

That was when I thought of a college friend’s debut, which was in an out of town resort. Of course it’s a party so you expect to get to know new people and for the energy to be just there. However, when it got to probably two to three in the morning, the people by the pool area playing cards were dwindling in number (me, fortunately, included with those who stayed behind). So, I thought of these characters and putting Mayumi and Micah into that situation wherein they would be the only ones left in a big space. What would have happened and what would they do?

We all want the happy ending, the dream come true. But what if it doesn’t happen? How far would you go to get that “ever after?” Would you change who you are? Would you swallow your pride? Is the story really going to be as perfect as you think? Follow the path of these characters and see where they lead.

Fall for Grace by Anne Plaza

Just the Way You Are by Kat Sales

Rica Valdez has always been one of the guys, so it was hard for her to find a prom date. When her new friend and crush Joshua Fernandez volunteered to take her to the prom, she wondered if he liked her back too, or was he just being nice?

Love in the Time of Viral Videos by R. Linea

They say that that the things we own tend to own us in the long run. Today, at a time when we’re connected 24 hours a day and 7 days a week, social media has helped shaped who we are, how we want to be seen and how we deal with other people. And if that’s the case, then who knows us better than our own social media accounts? This is the story of Patch and Sebastian who met in real life, as told by their digital selves. This is their story in the time of #hashtags, inspiration boards, and viral videos.

The First Time They Met by Ana Valenzuela

Is it her long time best friend Marie? Marie is now in college, and Mayumi starts to doubt their friendship as Marie meets new people and gets closer to them.

Or is it this basketball player named Micah? A guy she recently met and who has turned into an overnight confidant.

The Path of Us by Cassandra Javier

Are our paths already laid out for us, or can we make them ourselves?

Clara has always been fond of fairytales and grand gestures. She always had a plan of how she’d like her life to turn out, and that’s why she worked hard to be on top of the class, and make sure that she has her real life Prince Charming to boot.

And then there’s Andrew.

Andrew’s always been the easy go lucky guy, but that doesn’t mean that he’s not smart and appealing; it’s just that he chooses to go through life in a fuss-free, no nonsense way.

When Andrew and Clara’s paths meet, things don’t exactly go easy. They hated each other with a passion, but then they got to share unexpected moments, and end high school with a memory that they’ll never forget. In college, they lose each other, and Clara has to go through the hardest things on her own–until a trip back home sends them to each other’s paths again.

Will they ever be able to understand their role in each other’s lives?

Or will they just get out of each other’s lives for good?

Cocoy’s not-so-secret dream is to one day become a gun-toting, ass-kicking secret agent. But she has another dream—and this time, even her best friends don’t have a clue—she dreams of being with someone.

Problem is, she finds out that Jaime Arguelles—a.k.a. the guy she’d been secretly crushing on for years—likes girls who . . . well . . . like pink.

To Cocoy’s logical mind, there’s only one solution: it’s time to go girly. After all, how hard can it be?

Ana Valenzuela is a graduate of AB Literature from UST. She has written for several magazines and online news blogs.

Cass is a cat lady who graduated with a degree in Broadcasting and has worked as a copywriter, a researcher in an IT company, a call center agent and was even a trainee for a time in a television network. She writes articles for a living. When not writing articles, she writes novels, fanfiction, short stories and whatever she may think of. She loves TV series, movies, music, and is a very big bookworm. She’s also addicted to butterflies, faeries and Ice Cream.

C.P. Santi is a Filipina author based in Tokyo, Japan. She is a wife to an engineer/musician/jokester and a full-time mom to two energetic boys. She loves cooking and baking, and enjoys feeding people, gorging on chocolate, watching J-doramas, belting it out in the karaoke box, and running around the house playing tickle tag. She also loves dreaming up stories about the people she meets.

In another life, she is also an architect and academic.

Her first book, Be Careful What You Wish For, is a contemporary romance based in Tokyo.