Love is the Answer (#romanceclass bundle 3) 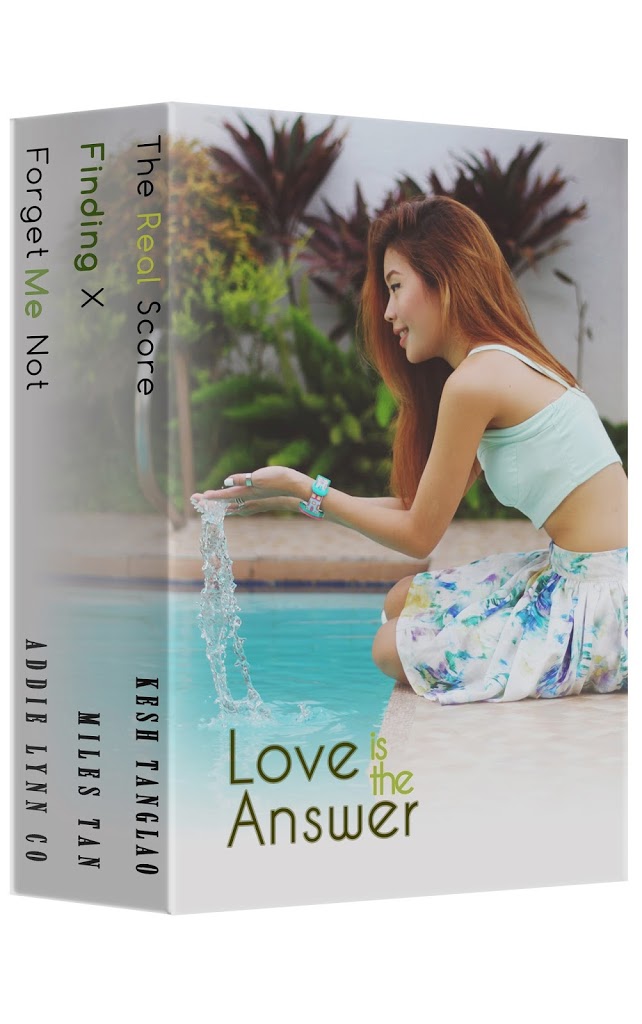 bit.ly/loveistheanswer
FREE from September 1 to 3
$0.99 until end September
$2.49 regular price until end February 2015
FREE to read for Amazon Prime and Kindle Unlimited
Sweet, contemporary romance by Filipino authors. Enjoy three new adult/chick lit novellas in one bundle!
FINDING X by Miles Tan
Is there a science to falling in love?
Carlisle Santiago is through with men. After the devastating end of a seven-year relationship, she’s trying to put her life back together. What she doesn’t know is that she is the subject of the patient and methodical observations of blue-haired scientist Matteo Villegas, who just wants to find love himself. She must decide whether she’s ready to give love another shot or if this is doomed to be one failed experiment.
THE REAL SCORE by Kesh Tanglao
Caitlin’s friendship with Marcus, the de facto frontman of the world’s biggest boy band Gezellig, has long been an object of scrutiny by almost everyone–their friends and families, the media, and his fans–ever since they “went public” a couple of years back. Who wouldn’t be interested? She was a nobody, catapulted into the limelight of his fame when he struck an unusual friendship with her.
To both Caitlin and Marcus, what they have is a “perfect little thing.” But then something comes along and threatens it.
In a no-holds-barred interview, will they finally be forced to settle the score?
FORGET ME NOT by Addie Lynn Co
Rianne has lost her memory of the past two years due to an accident, but letters from a mysterious “Sparks” — found in a pile of unread mail at home — have been helping her cope. The letters tell her of a couple’s love story, making her hope to find the same unconditional love someday.
Rebuilding her life has been a mess though: her guy best friend is claiming to have been her boyfriend that time, but she seems more at ease with a mysterious stranger. Does she trust the past she can’t remember, or take a chance with a more uncertain future?
Cover designed by Tania Arpa, featuring Rhea Bue.

How I format my ebooks