Pleasure to Meet You, a short story, is about youngest Monterojo sibling Julio, a minor celebrity via YouTube, who meets Natasha at the shoot of a dating show on cable (heat level 3, set pre-2020).
See You Under the Counter, a short story, has middle sibling Manuel Monterojo, about the night when he gets stranded at a food park in Ortigas and…finds an old/new fave (heat level 0, set pre-2020).
Your Place Next Year is a novelette about Alia the eldest Monterojo. So close to being promoted as country director of the firm she works for, but a surprise reunion makes her question her life/career choices (heat level 3, cw covid references, set post-2020). 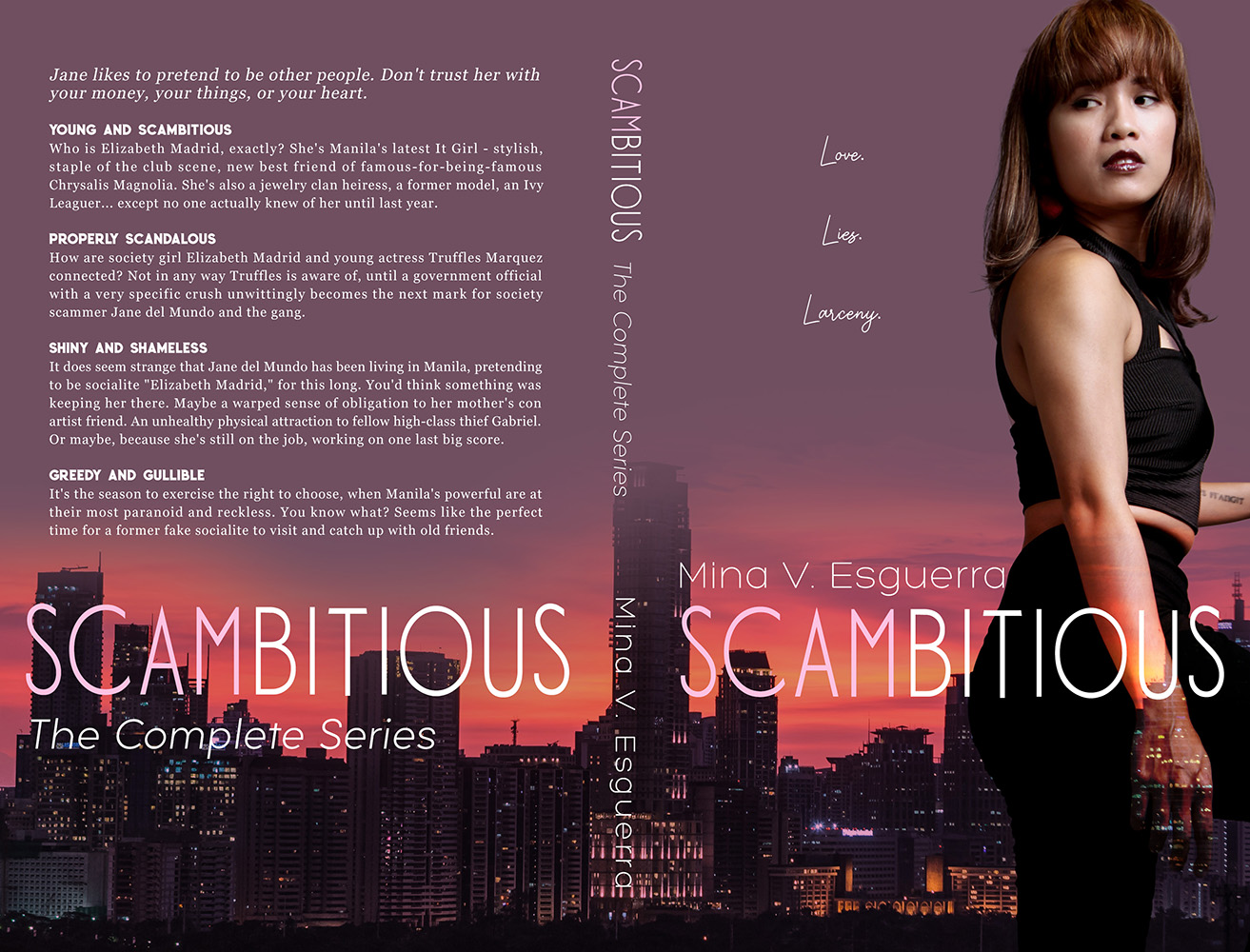 Jane likes to pretend to be other people. Don’t trust her with your money, your things, or your heart.


Six 32 Central
Adult contemporary romance, Filipino characters. Published 2018 to 2021, this is set in fictional business district “Six 32 Central” and involves characters who are “older” (at least based on books I’ve written before). The youngest main character here is turning 30, the oldest is 41. I’ve seen these described as “low angst” but what that probably means is I rarely have a third act major conflict or breakup, or life-at-risk drama. The main characters here have lots to say about society’s problems, how they’ve been affected, how they try to make things better. “The world’s terrible” is pretty much an underlying conflict.

What Kind of Day: Senator’s speechwriter goes on an accidental tour of his own city, and bonds with the tour guide who sees beauty in the chaos of Manila.

Kiss and Cry: Figure skater Cal and hockey player Ram were not allowed to date when they were younger. Ten years later, on his last three weeks in Manila, they get a second chance to see what their relationship might have been like.

Totally Engaged: Rose is 41 and (believe it or not) doesn’t want a green card marriage, so she asks Pascal to be her fake fiancé while her balikbayan family is in town.

[Short story] Saved by Hope: Hockey players Hope and Elias are hanging out at the rink on a Friday night because they’re each avoiding something, so they decide to make a game out of it.

Adult contemporary romance, Filipino characters. My first series (not originally intended to be a series), these books are standalones with somewhat connected/acquainted characters. Published from 2009 to 2017, most of these books are in first person, single POV, and depict common romance tropes but “localized” to the Philippines, with Filipinos are main characters.

My Imaginary Ex: Zack and Jasmine never dated, but no one else knows that. That story started in college, because she was being a good friend, and he needed help with something. The friendship and affection that followed were very real, but the lie kept causing trouble.

Fairy Tale Fail: Ellie’s unexpected breakup (with a “good guy”) makes her think about what that means, and what she really wants, especially as she connects with her office crush (the one people gossip about).

No Strings Attached: Carla’s 29 when she meets Dante, and he’s everything she didn’t know she liked. He’s also five years younger, maybe perfect for the non-relationship she had in mind.

Love Your Frenemies: “Villain” Kimmy ran away but now she’s back in Manila, to be maid of honor at her best friend’s wedding with her first love as the best man, and be reunited with all these people who hate her.

That Kind of Guy: Everyone’s manang Julie did date Anton for a year, and she doesn’t understand how it happened. He’s a “player” who slid into her life and doesn’t seem to want to leave. Can people really change?

Welcome to Envy Park: After 5 years in SG, Moira’s back in Manila with a new apartment, but no job, no career, no boyfriend. She’s leaving soon anyway. Does she start something new with someone about to leave too?

What You Wanted: When Andrea and Damon meet, sparks fly, and they give in to the attraction. They keep it going because they do like each other…and making other people jealous? Part of the fun.

Iris After the Incident: “The Incident” was something very private made very public, and Iris’s life was divided into “before/after” that moment. This is when romance and genuine connections return, in the “after.”

Better at Weddings Than You: Daphne is the best wedding planner in Manila, and she’s been hired to take over a wedding in crisis mode. Aaron had that job but he’s new to the business, is an old friend of the bride, who might be falling for him…it’s a mess. Who’s the planner who can fix this disaster? 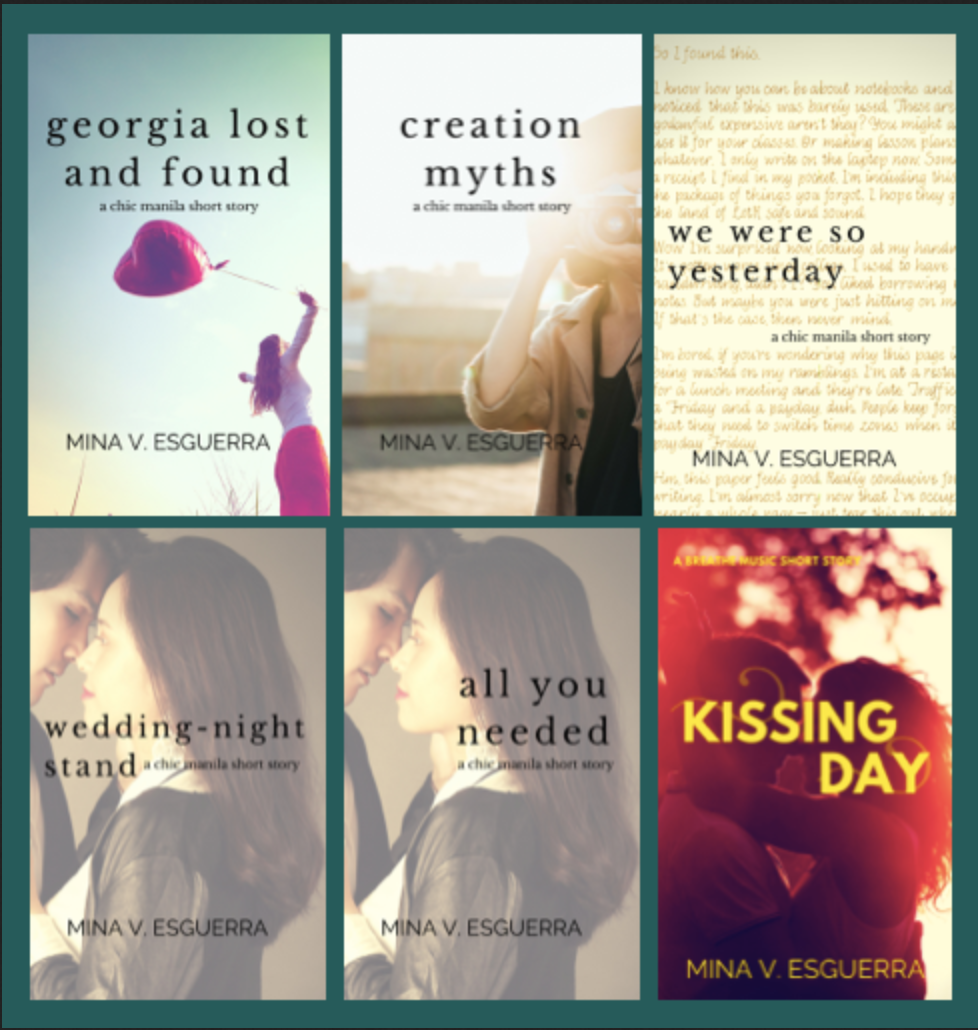 Georgia Lost and Found: Georgia wants to finally talk to Ken about this “thing” that’s between them, but he seems intent on avoiding it, even if they’re spending a weekend at a music festival together.

Creation Myths: Kat’s a film student, all moody and artsy. Carlos is an engineering major who was convinced to be in her movie. It’s either the beginning of a beautiful collaboration, or the flop that’ll ruin them both.

We Were So Yesterday: Roxie and Peter’s notebook. Cover features calligraphy by Faith Yeo.

Wedding-Night Stand: Andrea Crisostomo is no longer your Ms. Right Now, thank you very much. She’s had enough of guys who like her “free spirit” but then break up with her before things get serious. Damon Esquibel enjoys the slow and steady chase, and it looks like his two-year pursuit of Geraldine is about to pay off. He’s at his friend Anton’s destination wedding only because of her. But then he meets the sister of the bride, who doesn’t seem to want to be there, and it’s enough to question his plans for the evening—and the rest of the weekend.

All You Needed: Andrea and Damon’s first Christmas together. From the Make My Wish Come True #romanceclass anthology.

Interim Goddess of Love: College sophomore Hannah Maquiling doesn’t know why everyone tells her their love problems. She’s never even had a boyfriend, but that doesn’t stop people from spilling their guts to her, and asking for advice. So maybe it shouldn’t be a surprise when the cutest guy in school tells her that she’s going to have to take on this responsibility — but for all humanity.

The Goddess of Love has gone AWOL. It’s a problem, because her job is to keep in check this world’s obsession with love (and lack of it). The God of the Sun, for now an impossibly handsome senior at an exclusive college just outside of Metro Manila, thinks Hannah has what it takes to (temporarily) do the job.

The Future Chosen: In the future, Maria Lourdes and Andres Miguel could very well be their country’s best and most influential leaders. Marrying another politician is against the law, but why should it matter? Today they’re just young people who want to be together. They’ll deal with the rest of it tomorrow.