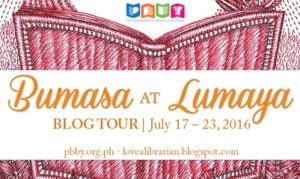 Welcome to my stop on the Bumasa at Lumaya blog tour! We’re celebrating National Children’s Book Day on the blog. I’ve decided to devote this post to discussing Filipino YA, but you can check out the other posts as well at School Librarian in Action to see more from the tour.

Accompanying NCBD 2016 and the blog tour is the release of Bumasa at Lumaya 2: A Sourcebook on Children’s Literature in the Philippines. It’s exactly that, a book filled with what an educator or lit enthusiast needs to learn more about lit for children and young adults, as it’s being produced and enjoyed in this country. 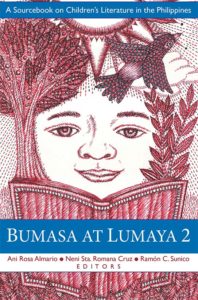 So, I’m a YA reader, and that was how I approached this blog tour post and what I wanted to talk about in it. I first learned of the term YA when I was a teenager reading Sweet Dreams and Sweet Valley High (“Bantam YA” it said on the spines and front matter), and quickly attached myself to that category, realizing that there was a whole line of books being published exactly for me. But these were stories of young adults in America, and some things didn’t translate as smoothly — like high school students driving, like lockers in school, prom’s rituals, or even just being 18 and a high school senior. I was 16 when I graduated from high school, although that will change in life as well as in YA now that we’ve adopted K-12 in this country.

As an adult reader, I went back to YA by starting with the popular American books. Definitely read and enjoyed Rainbow Rowell (Eleanor and Park, Fangirl, Carry On), John Green (The Fault in Our Stars), Suzanne Collins (The Hunger Games trilogy), Jenny Han (To All the Boys I’ve Loved Before), E. Lockhart (We Were Liars), Emery Lord (Open Road Summer), Veronica Roth (Divergent trilogy), Marie Lu (The Young Elites), Kasie West (The Distance Between Us)…and more. Of these I fangirled Stephanie Perkins (Anna and the French Kiss, Lola and the Boy Next Door, Isla and the Happily Ever After) the most, showing up to her signings in Manila and Cebu — because I happened to be in Cebu on the same day for a wedding, it wasn’t me being too clingy I promise. I’ve been wanting to explore more YA outside of the US and have started with Australian books gifted by friends, and started with Melina Marchetta (Jellicoe Road).

As an author, I’ve dabbled in YA (my Interim Goddess of Love series) and led the #buqoYA workshop that focused on YA romance. Because I write romance.

Q: How much new YA per year should Philippine publishing aim to produce? In the ideal situation, how many titles should be we releasing, and what could that lineup look like? (ie what are the sub-genres? themes?)

Pacis: Themes would be those close to a teenagers heart like romance and fantasy but there should also be historical fiction, science fiction, horror and comedy.  In short, everything.

Sunico: Right now, the YA horizon is wide open. When I began, the goal I set for myself was one to two titles a year.

After a few years though, I ran out of authors and was forced to turn to writers living outside the country to get any content at all.

So right now, sorry, but I think the “should” part of the question is more apt for a better developed industry like those of the US or Germany.

I can share though, that if one wants to do titles with decent production values and content that will be adopted by schools into their reading lists, one has to invest quite some time in the editorial process. One of my books began as a thesis and it took over a year before I was ready to publish it. I also had three other titles that took over a year before they were in publishable/marketable form.

Same answer for the sub-genre question.

While my personal preference is for either historical content or content that discusses contemporary issues of interest to the YA reader, I will pretty much look at anything engaging and well-written.

I must say though that the future seems to be in Filipino or street writing, a language category. The Mother Tongue project is also very exciting.

I think the great number of categories and formulaic definitions used in the States work well for their marketing and commercial culture where every submission can be slotted into a pigeonhole. That was not my experience in Germany or France though who both had broader and more flexible categories. My personal experience was with Beltz & Gelberg (Weinheim, off Heidelberg) and Ravensburger (Ravensburg).

Q: “The gap” being discussed seems to be YA that is taught in schools, because “in the wild” there’s a lot of young adult/teen fiction. Could a solution (if short-term) instead be a review of what students are reading outside of assigned texts, and determining ways to discuss them in class? Should we instead get educators to look at what’s out there (ebooks, indies), because there most likely is something out there discussing that theme or topic already? How could this work?

Sunico: It was Carla who thought up the title, but the original submission really wanted to underline how little YA publishing there was in the country. That’s the gap she was referring to. Yes, our focus is getting our books in the reading lists of schools.

I see what you’re saying about “in the Wild.” The old big story of course is Diary ng Pangit—started off as a personal project in Wattpad, was it and then saw success as a low production value title that sold 60, 000 copies.

Yes, although I wouldn’t call it a solution— I think a review is part and parcel of marketing.

From the school point of view, the reality is that the curriculum and syllabus are king. They’re not just looking for titles that the youth like reading; first they have to see how it fulfills the requirements of the schools.

In this regard, I’m quite interested in how the Janus Silang initiative of Adarna is faring. Here is an attempt to start off with what engages the youth after/outside school (DOTA) but written by an author with an academic background in lit-crit and po-mo.

As to getting educators to look at what’s out there: good luck.

My experience is that teachers resist new titles because these require more reading and new preparation. This is why most YA books being marketed by Cacho before for Anvil had to have review questions at the end of the books. Also, not a few of them are reactionary or backward looking—preferring Lola Basyang stories for no other reason than that they know this already. We’ve had some informal surveys where, at least for younger children in the provinces, their preferences for books were at odds with those of the teachers.

Pacis: I think what teachers of Literature are looking for are novels that are well-written and of substance or something that is worth discussing in class.  It is probably a novel the students themselves would not choose for themselves because of their limited experience.

Q: We see at events, signings, and online interaction that the YA scene is driven by female readers, authors, bloggers. How does that affect workshops, calls for manuscripts, and other traditional publishing decisions?

Pacis: It would be great if there was another workshop for YA authors and the sectors you mention would most likely be chosen.  They have the potential to be good writers and only need the encouragement and guidance.

Sunico: Yep. You know my one year at Anvil, when I was designated editor for YA, about 97% were written by females, many of them trained in your workshops.

Most of these 97% were about romance and young love—so I kept referring these to our romance editors. My superiors couldn’t get the distinction.

I think that this could be a symptom (I’m not sure) of the immaturity of our content production. (In Indonesia on the other hand, Rudy Gunawan, my friend in Gagasmedia, claied that most YA was written by men.) I’d like to consider myself gender blind but in this case, it’s impossible not to notice the preponderance of works by women.

I’ve never been to a workshop to learn how to write although I have given talks in a few. I don’t know how much gender thinking gets into the planning of the more established ones. Obviously, there can be workshops like yours that specifically target a gender.

Not sure, unless it’s a very specific project, how a publisher can take gender into account when making manuscript calls without raising the possibility of being accused of gender bias.

Q: What kind of Pinoy YA book do you wish were on the shelves right now? (List as many as you like — authors might take up the challenge to write just that haha!)

Pacis: All the genres are welcome. Pinoy writers aren’t writing for YA!

Sunico: I want a lot of well written, riveting books for YA.My real interest today is actually pre-reading books, chapter books and a lot of non-fiction. I think a lot of teenagers are already reading in all these online communitites anyway—and that’s the right place for fan fiction, not shelves, because that could cause a lot of IPR headaches.

As you can see by now, our titles landscape is very uneven, very patchy, like the head of someone with scalp disease. Loads of picture books that sound like Rene Villanueva or Russell Molina. Lots of very derivative fantasy, looking for an audience. Lots of romance and chick lit or whatever all these are called by Americans nowadays. Lots of Diary of a Wimpy Kid knock-offs. Am excited by the vigorousness of the graphic novel culture, but I wish they would think of their younger siblings once in a while—but hey, they’re teenagers.

Thank you, Ms. Carla and Mr. Ramon! I edited this a bit because I’d like to continue the discussion with Mr. Sunico and pick up on questions he asked me…but that can be for another post. 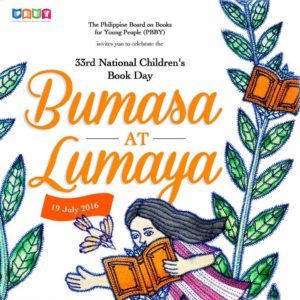 Iris After the Incident

Giveaway: Thanks from me and #romanceclass!