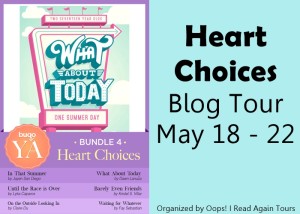 Welcome to my stop on the #buqoYA HEART CHOICES blog tour! Taking over my blog today is author Claire Du, and she tells us who her dream cast would be, if her story were to become a movie.

Last month, I joined a writing class with Ms. Mina V. Esguerra as our mentor. It has been running for more than a month now, and sometimes, writing a novel – composed of 20k words or more, that is, can be draining. Especially if you’ve reached that point when you’re already starting to hate the story you’ve created and you just want to throw everything in the nearest trash can (yes, it happens). To cut the story short, Ms. Mina sent words of encouragement thru an email, wherein she reminded us why we joined that writing class and what should keep us going. She gave us a list of her own dreams for the books she has written. One of the things that struck me the most was her dream of Nick Bateman dressing up as one of her characters (I’m rooting for Lucas!).  And so, I got very excited upon receiving an email for a guest post regarding the topic. A lot of authors today have their books being turned into movies. That, happening to me, would really be awesome. Could anything be cooler? I think, having your pegs portray them in the big screen would be a dream come true for all writers!

My #buqoYA short story On The Outside, Looking In was created with these real-life pegs in mind:

Main Character – Freya Mahilum. Freya is kind, intelligent and brave. She’s shy at times but she’s strong-willed. When I think about her, I see Lily Collins. 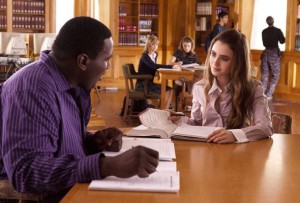 Lily totally looks at home in the library, don’t you think? Though Freya for sure wouldn’t be made up like her in that picture.

Love Interest – Ezra Montelibano. People see him as this I’m-a-jock-so-that-means-I’m-cool type of character but what made me love Ezra, aside from his passion for his sport, was his close relationship with his family and his ways of making a girl feel kilig of course! 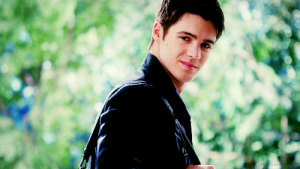 Steven Mcqueen’s gaze and that half smile. Need I say more?

The support group –  In every story, there’re the bad guys and there’re the good guys. How would Freya be able to face the challenges of teenage life without the help of her friends? Lucky her, she’s got dependable ones ready to be there, may it be for a writing competition or just a sleepover playing Scrabble and Uno! 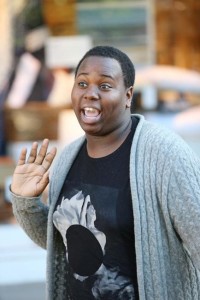 Alex Newell’s energetic +  bubbly personality suits BFF Francis’ character. Not to mention, Freya could always use that kick of energy to wake her up from her usual day dream of Ezra. 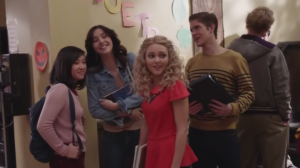 Freya and her friends have a bond as tightly-knit as these girls’ closeness. And that would make Anna Sophia Rob, Katie Findlay and Ellen Wong the best soul sisters for her.

The Villain – Claudette. Two words – polished and pretty. Behind that sparkling surface, lies one spoiled, jealous girl. Poor Claude, she wanted all the attention in the world. Which includes the attention of almost every popular guy in school. But we can’t have it all, can we? 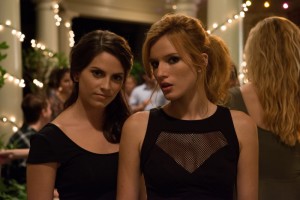 Bella Thorne would be the perfect fit for this role. She’s like the modern version of Regina George.

So there you have it! I really had fun putting up the list of characters for you. And ’til now, I still have the feels  ~eeek! An author can dream, right?  How about you? If you’d get the chance to cast the characters of your favorite novels, who would you want to portray them?

More about the HEART CHOICES bundle!

HEART CHOICES
Sometimes it’s hard to choose. Do you stay or do you let go? Should you become friends, more than friends, or stay strangers? Would you risk love for popularity? You’re invited to explore these stories and find out each character’s choice from the heart.
Until the Race is Over by Lyka Caparos
Rico wishes Lianne back in his life, but because of that viral article that Traecy posted on their school paper’s website, it appears to be impossible for them to be together again. Traecy on the other hand, had only one wish for her birthday, to spend it with the one she admires since high school – Rico Avila. How can fate brings the two together in a race that would definitely reveal small discoveries that can lead to two choices: either to tear them apart or hope for a more unexpected relationship?
In That Summer by Jayen San Diego
Senior high school student Jane Enriquez is the ‘dream-girl’ of all male students at Southridge Montessori. Well, except the geeky student leader Sean Villamayor. Opposing from the start, Sean never expected Jane would become his partner for this year’s Summer Camp Immersion. Will this be their worst summer? Or will it turn out to be different?
On the Outside Looking In by Claire Du
Seventeen-year-old Freya Mahilum has always been in love with football hotshot Ezra Montelibano. Ezra, who’s too caught up with family pressures and his so-called girlfriend to pay attention to a geek obsessed with him. Freya knows she’d never stand a chance with him, but then fate conspires to bring them together. Will getting to know each other prove that love knows no boundaries or will they find that they’re better off existing in two separate worlds?
What About Today by Dawn Lanuza
Aiden’s stuck working for his family’s amusement park, Funtastic World, for the whole summer. Nothing amuses him, until he met this terrified girl.
Gemma’s stuck in Funtastic World thinking she could handle the park’s rides. She couldn’t. Good thing she met someone to guide her.
As the day comes to a close, Aiden and Gemma ask themselves if one day is ever enough to decide if they were better off as friends or strangers.
Waiting for Whatever by Fay Sebastian
Denise knew pain at an early age. She has been waiting for her true love since she was 11, but she never gave up, knowing she’d meet him someday.
What she didn’t know was that she already met the man she’s been waiting for, and that he’s sitting beside her at the airport. The thought never crossed her mind because she’s seated between two guys who broke her heart before.
Barely Even Friends by Kristel S. Villar
For pretty and athletic Emily Fonseca, nothing’s better than getting invited to join Luna East Arts Academy’s most popular crowd, the Elites. She only has to fulfill a list of dares to prove that she’s got what it takes. But will it cost Emily her rekindled friendship with language tutor and childhood friend Noah Calderon?
Purchase link: Buqo
About the authors
Lyka Caparos
Because I want something in my life that I think is better than pursuing a degree that is far beyond the expectations of my heart.
Blog | Twitter
Jayen San Diego
Who I am?
I’m Jayen San Diego, a twenty-something who write stories mostly about love. I’m a news archivist by day, fiction writer by night and a self-confess Fangirl in between.
Why I write?
“In order to write about life first you must live it.”
― Ernest Hemingway
They say when we want a moment to last, we close our eyes. Well, for me, I prefer to write it down. Reliving the moments through writing is what I do.
What I write?
Sharing my thoughts about life and love and writing.
From personal anecdotes to life opinions, you can read it here. When my melancholic side is on, you can read poetic post but generally it is a mirror of what’s happening in my daily life.
Blog | Twitter | Wattpad
Claire Du
Claire has been a bookworm ever since she can remember. Her passion for reading started when she met Archie Andrews at the Airport Bookshop. Aside from writing short stories, she also enjoys reading and reviews athttp://thebookjunkie.weebly.com, playing the keyboard, and just cuddling with her dog Frou. She’s the author of He Loves Me… Not?, one of the short stories in an anthology called Luna East Vol.1 : Kids These Days.
Blog | Twitter | Wattpad
Dawn Lanuza
Dawn Lanuza started writing stories when she was just a kid (the drafts weren’t good or even finished). She works for the music industry by day and writes meet cutes and snappy comebacks by night. She currently lives with her family and an adopted dog.
Blog | Twitter | Facebook
Fay Sebastian
Fay started writing stories since she learned how to write with a pencil, but she only rediscovered her love for writing when she was a high school freshman. Since then, writing has become her life.
Now a Speech Communication student at the University of the Philippines, she writes even during the busiest of days because writing prevents her from being a college zombie.
Why she holds writing instruments in an odd way will always be a mystery to the world.
Blog | Twitter | Facebook
Kristel S. Villar
Kristel S. Villar covers sporting events for a national broadsheet by day and tries to write fiction by night. In between, she takes care of her husband and son. She has penned “Blast from Two Pasts”. a contemporary romance novella, and “The Rumor About Me”, her first short story for the Luna East anthology. He second Luna East short story, “One on One” is featured in the quarterly online romance journal, Clara (www.clararomance.com).
Twitter | Facebook | Wattpad