Dream Fulfilled, time to make another one

You know when you have dreams for your writing and your books? It’s usually a bookstore spot, a book signing, a movie deal. For me, it’s something like this:

That clip above is Ashley Clements and Daniel V. Gordh (of Lizzie Bennet Diaries) reading a scene from John Green’s The Fault in Our Stars. I didn’t realize until I saw this clip that I want this. I want it. I want it for my books, and maybe I’ve wanted it all along.

I got a chance recently to make this happen.

I was supposed to run a workshop that would conclude on September 30. When I run workshops I try to do something different, like bring in people who may inspire the authors in some way, and for this one I thought — let’s do this. Theater actors. Surprise the workshop participants by having their work read aloud, and then we can instantly tell what works and what doesn’t. Theater actors will also have unique insight on what sounds good as a performance, and may help writers with that info.

My friends from college are still active in theater, so I asked Katski Flores for help. She’s an actor, a director, and the CREATOR of John Lloyd/Bea (not her official title but look it up — it’s totally TRUE I TELL YOU). I asked her if she could recommend actors who could read aloud books like mine. She gave me a very short list: Rachel Coates and Gio Gahol.

Rachel and Gio said yes to this. Oh my god.

Then the workshop got rescheduled (to February of next year) but now I had two awesome actors and no workshop to have them appear in. So I went to the #romanceclass Facebook group and said something like: “Hey, if I wanted to meet on September 30, will you actually do it even if it’s a work day and it’s in the evening? I have something special planned.” A bunch of people said yes. Yay!

Katski recommended a rehearsal, so I tried to set that up with Gio and Rachel a few times. We couldn’t make it happen, because Gio is working full-time in theater and at one point was actually touring in Korea. Rachel is in college so the rehearsals had to be during her free time and not so far from where she studies. And I have a wacky sked of my own, because I take my daughter to school every day and do anything publishing or writing related on weekends. The only time we had free was the day of the “something special” itself, a few hours before we asked people to come.

The plan was to have them read excerpts from romance novels aloud. Like a table reading, so no need to act and choreograph scenes. I sent them the clip of Ashley and Daniel as a peg. They were game and knew they could do this. 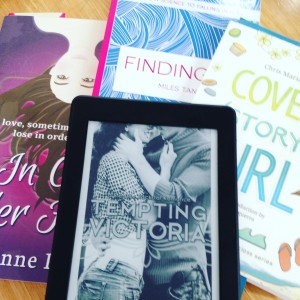 They read excerpts from Tempting Victoria, In Over Her Head, Cover (Story) Girl, and Finding X.

Now, for the excerpts. Of course I wanted them to read one of my books (duh! my dream after all), but I also knew that authors from #romanceclass were coming and I wanted this to be enjoyable for them too. I’m so proud of what they’ve accomplished and I know I owe them a lot. My career in publishing has taken off since they started writing and publishing and it’s no coincidence — their successes make me feel like I know what I’m talking about. They have to feel this too, somehow, because so much of what we do every day is support each other through doubt. (Writers, so dramatic! But true. We’re our worst critics.)

I’m not going to go into how I chose the excerpts — let’s keep that thought process a mystery for now — but at the very least I wanted Gio and Rachel to get equal “stage time” so I chose two male POV and two female POV excerpts. Gio would have to be narrator twice, and Rachel as well. I sent them the excerpts a few days before we met. 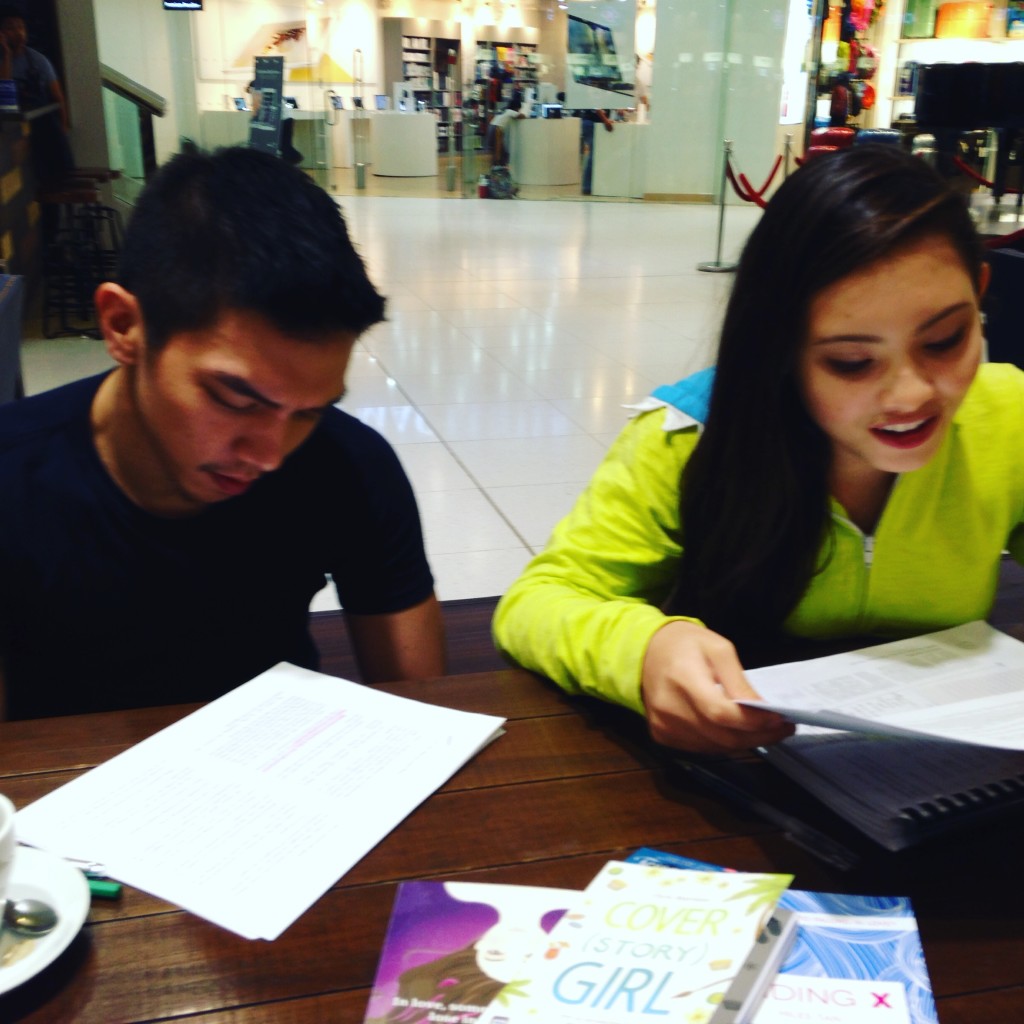 Gio and Rachel at rehearsal

And then, September 30. Gio asked if he had to wear a costume. I said, “No costume! Just a romance novel hero demeanor.” (What’s that?) And then when I met him he had it. He did.

Rachel and Gio met for the first time at our quickie rehearsal. I gave them printouts, they asked if they could write and highlight on them. I said sure. I gave a quick summary of the books each excerpt was from, before they rehearsed it. Gave some info about the characters they were playing. They asked questions, like, how geeky do I play this? What does she do? but apart from that, they just took the characters on.

The effect was instant and amazing. From the first page they began reading together.

I tried to play it cool while they were working in front of me, but they started with my story, and I was like, shut up. Oh my god. This is happening. I gave them a male POV scene, so Gio was narrating, and I wondered if I did the right thing because I gave them one of my US-setting books (Tempting Victoria), and Gio was essentially playing a guy from Texas. (“You don’t have to do the accent,” I told Rachel. She said something like, “Oh no now that you told me I have to do it.”) We decided on no accent anyway because this was our first time and we should play it safe. In any case, they were wonderful. It was how I wrote it, but not necessarily how I thought I would hear it. It was…better? I don’t know. It made me feel better about what I wrote.

On rehearsing the next three excerpts, the effect was the same. The characters, story, and tone for each excerpt was different, but they were on point the whole time.

Then we went up to the actual event space and they performed. 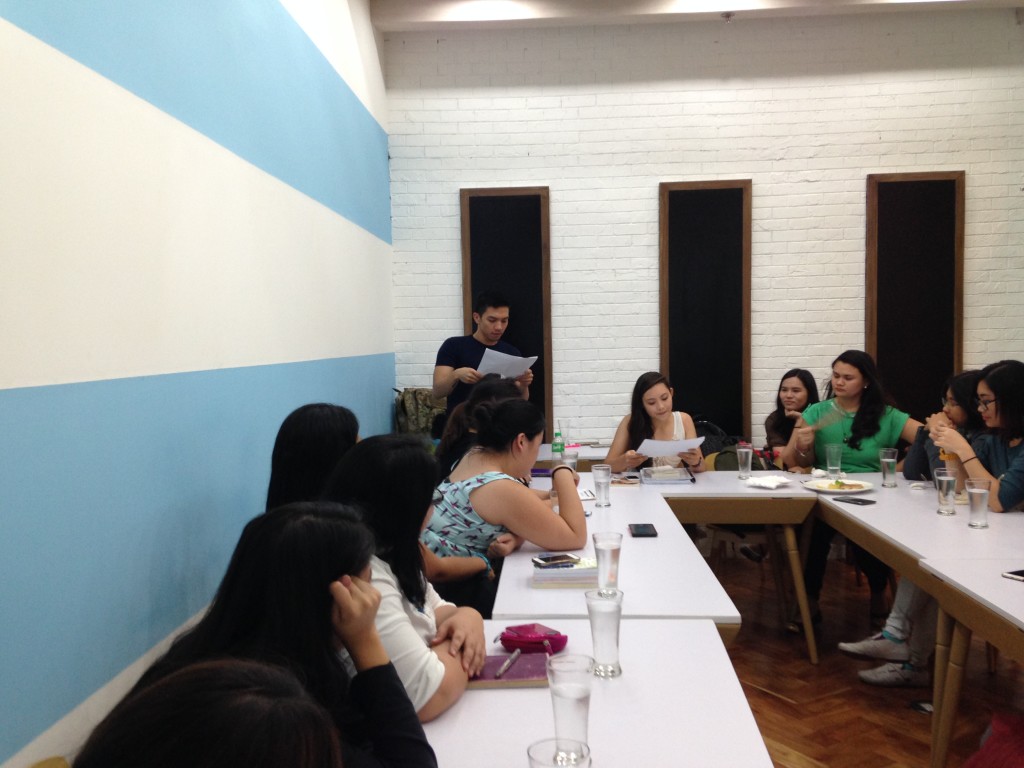 #romanceclass authors and our love team of the evening

Can I just say how gratifying it is to have over a dozen people agree to come to a thing on a Wednesday night in Ortigas? Because Manila traffic has been epic lately, and they don’t even really know what’s going to happen. I mean I told them that Rachel and Gio were coming to read stuff, but what does that even mean? It was my dream. Not necessarily theirs. 🙂 I wanted to hug them all. And they were early.

We started off with introductions. Everyone in the room had written and published something, or was writing something. But we all were readers of romance too, and that I think was the key to this. It’s a community of readers and authors, and tonight would remind us that we need to be both and appreciate that side of ourselves.

The other thing was that this felt like a surprise party to me. There were three authors in the room (Anne Plaza, Chris Mariano, and Miles Tan) who didn’t know that their work would be performed right in front of them. Gio and Rachel knew this was a surprise so as the intros happened, and Anne, Miles (and eventually Chris who arrived late) said their names, we would trade excited little looks. At first they were nervous to be reading in front of the author, but I think eventually they knew that they were going to be giving a happy surprise to some. 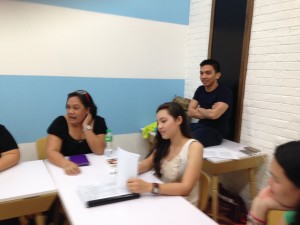 Random: I love that Gio sat on the table. It just…works.

Anne has recapped the rest of the night on her blog. I can’t speak for the other authors but my dream was happily fulfilled, thank you very much. Except now I feel like this is worth doing, and we should be doing more of this. The excerpts were read so well that I feel we saw a book we had read in a whole new light, and now we want to read it again. And if we hadn’t read that book before, now we want to. It’s an exercise that I think enhances the reading experience instead of replaces it…even though I’d gladly let Gio or Rachel read an entire book to me if they’d do it. (And maybe we’ll make this happen too.) 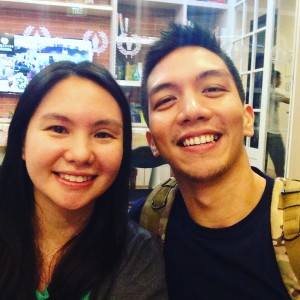 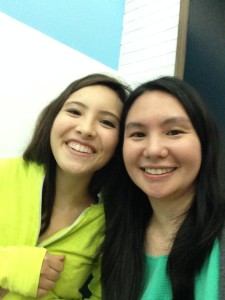 So all in all, great evening. Now I have so many plans. 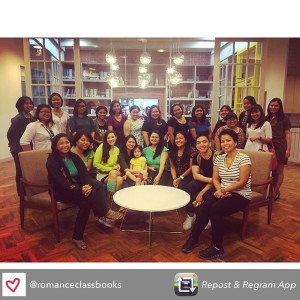 Authors, friends, people I adore. Spot the one who wrote your fave book!