My Imaginary Ex was the first of my books to be published. The idea for it had been in my head for a long time — through a short story that I had written almost ten years before. That story shows up in the book eventually as this part of Chapter 4.

“Problem? Did Zack talk to you about our ‘problem’?”

Perhaps I had caught Lena at a bad time. She wasn’t as relaxed as she usually was. She didn’t look like she was in a hurry to go somewhere, but she sure looked annoyed at me.

“No,” I said, quickly trying to save myself. “But he’s been moody lately. He thinks something’s wrong with the two of you, but he didn’t say what. He wants to fix it though.”

Lena petulantly hugged her binder, and I didn’t need to be a psych major to know that she had just put up a wall between us. “Whatever the ‘problem’ is, it’s none of your business, Jasmine. I amdone with the two of you, honestly. I should lock you two in a room and you can either fight it out or end up together. Either way, I’m done.”

“It doesn’t matter what you say, Jasmine. It’s how it is.”

“No, please, don’t break up with him over this. Please, think about it—maybe you misunderstood? We don’t have feelings for each other. You might be seeing something completely innocent and giving it the wrong interpretation.”

Lena paused at this, and her tight grip on her binder loosened a little. “Why does he tell youeverything?”

“Well, fine, but why does he tell you everything he tells me? Shouldn’t I come first?”

“You do, Lena. I don’t even know where he is half the time. We don’t even hang out.”

Technically that was true. We spent most of our friendship in transit. On his way to the coffee shop? To the Internet cafe? The library? The Math department? Drive me home from choir practice?

He’d wander over to my usual spots, and if I had nothing to do, I went along.

“I’m not friends with any of my exes. It’s not healthy,” she looked at me accusingly.

We share a secret, and that can really bind people together. I did not say that.

“Lena, it’s not what you think. We’re just friends, really.”

“I don’t treat my friends the way he treats you.”

“Lena, you liked how mature he was when he forgave me and decided we should remain friends,” I reminded her desperately.

That seemed to work. If Lena’s defiance were a balloon, it started to deflate.

“Jasmine,” she said. “Thanks for standing up for him, but this still is none of your business.”

She broke up with him right before Christmas, but it looked like she stuck around and gave it a try three weeks after we talked.

I didn’t tell Zack about it, and from the looks of it, neither did Lena. So now that was a secret Lena and I shared. I probably had to write it all down at some point.

The news got to me on the last day of school, before the Christmas break. I was looking for Zack in his usual spot, and only saw Ramon, his block mate. I didn’t know many of Zack’s friends, but the year before, Ramon was my ballroom dancing partner for PE.

“Did he leave already?” I asked.

“Yeah,” he replied. “Went home. Lena finally broke up with him.”

“They were talking by that tree for almost an hour.”

I showed up at Zack’s house with a half gallon of Double Dutch ice cream. The sight of me and my gift made him laugh. “I’m not a girl,” he said.

“Trust me, this will make you feel better.”

I stayed over for dinner, but I wasn’t hungry because I already had a few cups of ice cream in me.

Zack, at first, didn’t want to talk about Lena. I played the supportive friend and didn’t ask, so instead he told me about his economics teacher, the electives he was thinking of taking, and the business idea he wanted to use as his thesis the following year. There was also a movie he wanted to watch that weekend, maybe I wanted to see it with him?

“I thought you wanted me to feel better.”

“Talking will help resolve your issues.”

“If you want to help, come with me to this movie. Robots at war! I’ll feel better after that, I know it.”

“Are you sure your problems weren’t caused by our fake relationship?” I asked.

“I’m sure,” he said, vehemently. Was he trying to protect me? He knew I’d feel bad if I had a role in their breakup, but he didn’t know that Lena had spilled the beans already, and some of those beans had my name on them.

“Well then. I think that next time, you shouldn’t even bring it up. I think Lena’s…impression of you was tainted by a lie. Next time, just be yourself.”

Zack exhaled dramatically. “I didn’t exactly think that one through, did I?”

“No.” I scooped out another cup of ice cream for myself, finally accepting that we both kind of ruined that relationship together. I needed chocolate.

I reached over and squeezed his hand. “I’m sorry about Lena. You should never again tell anyone I was your girlfriend.” 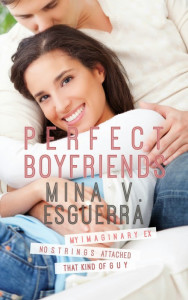 Get My Imaginary Ex on buqo, and Amazon / Smashwords (through the Perfect Boyfriends compilation)