#FeelsSoHot recap: Thoughts when sex scenes are read out loud 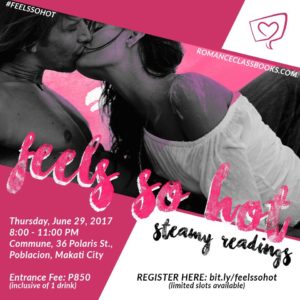 I almost didn’t write this recap. For the tenth version of the #romanceclass live reading events, we did something new: we made it adults-only, so we could have the actors read the steamy stuff. Previous events were held in open, general audience venues and while #romanceclass books (and maybe Filipino romance or “chick lit” in general) are perceived to be sweet and safe for work the number of authors writing more adult themes and scenes is actually growing. We saw it when we began proper categorization for the romanceclassbooks.com site and noticed that nearly half the catalogue could be tagged as Steamy, and I noticed it when I began to edit previous live reading excerpts prior to a performance, to “clean up” the language a little. The fact is, we are starting to accumulate a significant number of titles featuring edgier author voices, sexier situations. Filipino authors of romance in English are writing this. It was time to highlight this, rather than “clean it up.” One of the authors in our community (Kate Sebastian) challenged me to do this and charge an entrance fee for it.

Not that we made it easy for people, by the way. Past events were conceptualized so we could be discovered by the casual mallgoer or reader, but this wasn’t meant to be that. We held it on a Thursday night, in Makati, at a place that served liquor, and charged P850. If you live here you know that those are multiple layers of difficulty and deciding to go requires commitment and preparation. On the night of, over 60 people made this choice. Thank you! 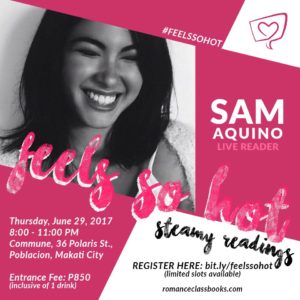 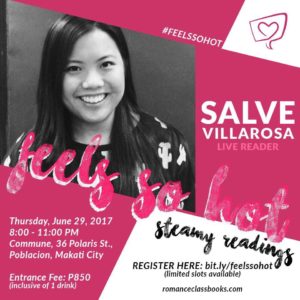 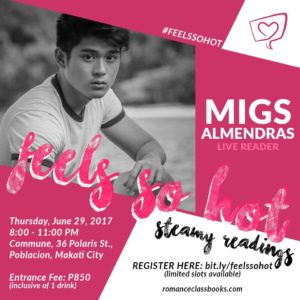 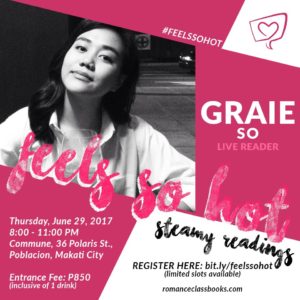 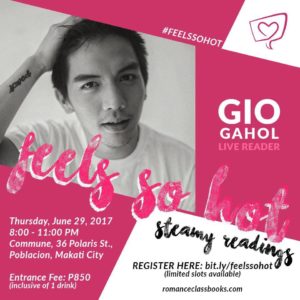 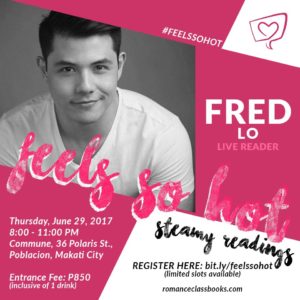 We couldn’t have been able to pull this off without our actors. I think #romanceclass events became a lot more successful when we got over the idea that it was simply a show of support for authors. Now it’s a thing we look forward to for different reasons  and support for your author friend is secondary and that’s totally okay. I feel that part of the reason the community feeling has grown is that we don’t have to choose to be an author or a reader — we’re all of that, and at events in fact we’re the fans. Of these guys and girls.

These were the nine books featured at the program. There were reasons! Apart from being sexy.
Other Than Easy by Laney Castro: Alternating POV and the characters were not Filipino, even if the author is. Because we can do that.
The Kitchen When It Sizzles by Chrissie Peria: One of the first full-length, steamy #romanceclass books with Filipino characters. It went there!
An Overdue Adventure by Kate Sebastian, from Summer Feels: Chose this because it was very particular about consent, even between friends, even between friends already somewhat physical.
If the Dress Fits by Carla de Guzman: A sex scene featuring a plus size MC and her body is very much part of the scene instead of forgotten. It’s also sweet as cake damn.
Feels Like Summer by Six de los Reyes: Hot but also hilarious, and so many character elements come together (haha I said that) in a sexy scene that’s quite emotional really.
Three of my books (Better at Weddings Than You, Properly Scandalous, The Harder We Fall) were read from and none of the scenes had actual intercourse, because steaming up a book doesn’t have to require removing clothes or a sex scene where it isn’t needed.
Then we had our first ever live reading from a historical romance novel, Under the Sugar Sun by Jennifer Hallock. Chosen because of that alone, and the author is a friend so I’m thankful that she trusted us with this. 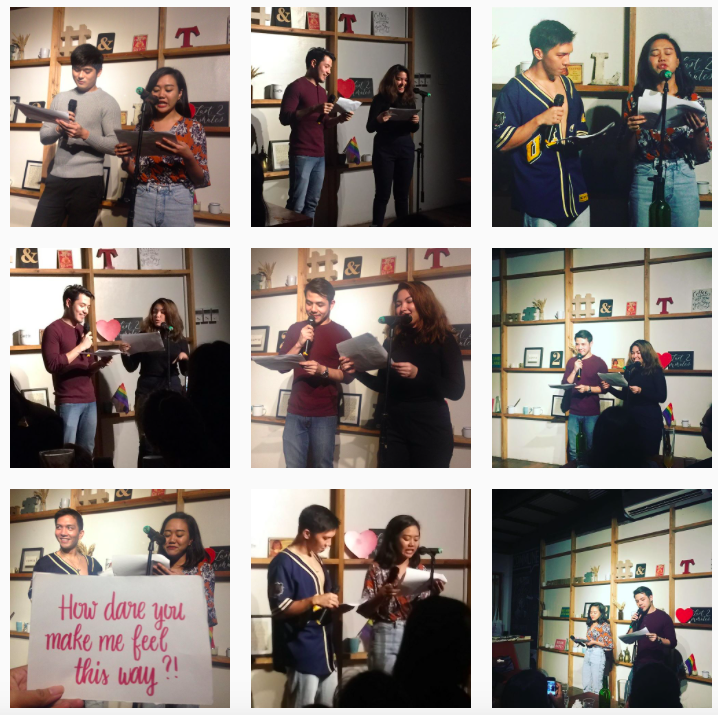 You’ll find photos of the event here on Instagram. As for the program itself? I was…floored. It already took a lot for me to start writing sex into my books. At first I told myself it wasn’t for me, and then I realized that I was holding back because of hang-ups that I thought I had gotten over. As an author you don’t have to do this, and this community will continue to support books that don’t have sex scenes and authors who prefer not to write them. But if you want to? Don’t hold yourself back, friend. No judgment here.

Still, watching your sex scene being read? It’s different. It’s…I couldn’t do it. I mean I was there for two of three but the third was the most explicit and I was there for rehearsal but I had to step out onto the balcony and missed most of it. There’s video but I haven’t watched it. It’s something I need to understand about myself, haha, and I’ll get to it on my own time.

But I was there for the other excerpts and I was so happy for everyone. I’m glad the authors wrote this, and that the readers were there for the books, and that the actors read them so well. Each event has some tweaks to help us learn more about what we like to write and read, and this was a big step.

Apparently we can do this. We can write about sex, and begin to talk about (possibly normalize?) healthier and functional relationships with sex, and we can attend events celebrating precisely this too.

The next event will be on October 14, Saturday afternoon, at Commune in Makati again. Not steamy this time, but we’ll explore something new there too. If you’re into romance in English, or romance, or just anything about this post–you should come! Save the date.

My Imaginary Ex 2017 and a new author’s note