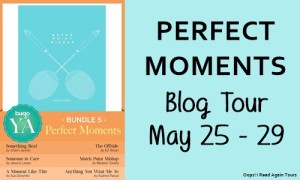 Welcome to my stop on the #buqoYA Perfect Moments blog tour! This ebook bundle is available from buqo now at this link: bit.ly/buqoya5. Taking over the blog today is author Audrine Pascal! But first:

Check out the other posts on the tour here: http://www.oopsireadabookagain.com/2015/05/blog-tour-invite-buqo-ya-bundle-5.html

The last time I attempted to write Young Adult was back when I actually passed as a young adult. So to answer how different Anything You Want Me To, my #BuqoYA manuscript, would require a nice, long chat over coffee and maybe three slices of blueberry cheesecake. However, I’ve condensed the lengthy discussion to three points, as a guest post here in Mina’s blog.

My main character, Via, is almost half my age – she’s 18; I’m 33. She’s worrying about being properly dressed for a year-end party; I’m worrying about my nine-year-old son winging middle school. I’m so much different now than my teenaged self. And the world is understandably different too.

Yes, I needed help. I asked beta-reading assistance from three people whose ages fall under Young Adult: a #BuqoYA cowriter, a Wattpad follower-reader and my management trainee at work. One had nothing but praises for the manuscript; one made one comment that I arrogantly brushed off at first; and the last one echoed the critique of the other, which made me do an overhaul of my story mere hours before the deadline. Just take a swipe at guessing who did what.

The whole point is this: I couldn’t consider myself a subject matter expert, so I got some help from my target market. And I listened. I almost didn’t, because I almost never do. But that one input completely changed the tone of the manuscript – and I’m so thankful it did.

I expect myself to cram whenever I write fiction. This time around, though, the cramming reached epic proportions, precisely because of that one comment I chose to ignore initially, but persistently gnawed at my brain until I caved in and gave it some serious thought.

I wrote the entire night. With three hours to the midnight deadline, I was nowhere near done.

My brain was fried, my eyes were bloodshot. But I continued to type like a frenzied fiend, intent on finishing my story. At 1:30AM, I emailed my manuscript, crossed my fingers that Mina would allow the slight delay and immediately fell asleep.

The whole point is this: I will not do this ever again. It is not healthy. A little bit of cramming is fine, because it amazingly works for me. But I was a zombie at work the next day and there’s no acceptable excuse for that.

When I rekindled my affair with writing romance some five years ago, I wrote about what I knew and that meant New Adult. Until this very day, I write in default New Adult. So imagine my dismay when my #BuqoYA beta told me that my manuscript was too “mature”.

No swearing, particularly the F word. No sex. Not even the mere mention of it. No wild party antics, like wet t-shirt contests or making out for the sake of making out. No minors drinking.

And it is an absolute sin if the main character shows signs of being shallow.

Wait, what? Isn’t Via supposed to be a teenager? Don’t high school kids have raging hormones? Can’t her tumblr posts be about cute polka-dotted sneakers instead of an economic forecast for the election year that is 2016?

In the end, I didn’t delete everything my betas prescribed. The final manuscript is so much tamer than its original draft, though. I tried on a high school senior’s shoes again – and yes, joining a wet t-shirt contest wasn’t really part of that world… yet.

The whole point is this: I thoroughly enjoyed writing outside my so-called comfort zone, including the massive overhaul and the steamy sex-less outcome. But then again, I am still me, so don’t be surprised that Anything You Want Me To is not as wholesome as the usual Young Adult fare. Wink, wink!