My Imaginary Ex 2017 and a new author’s note 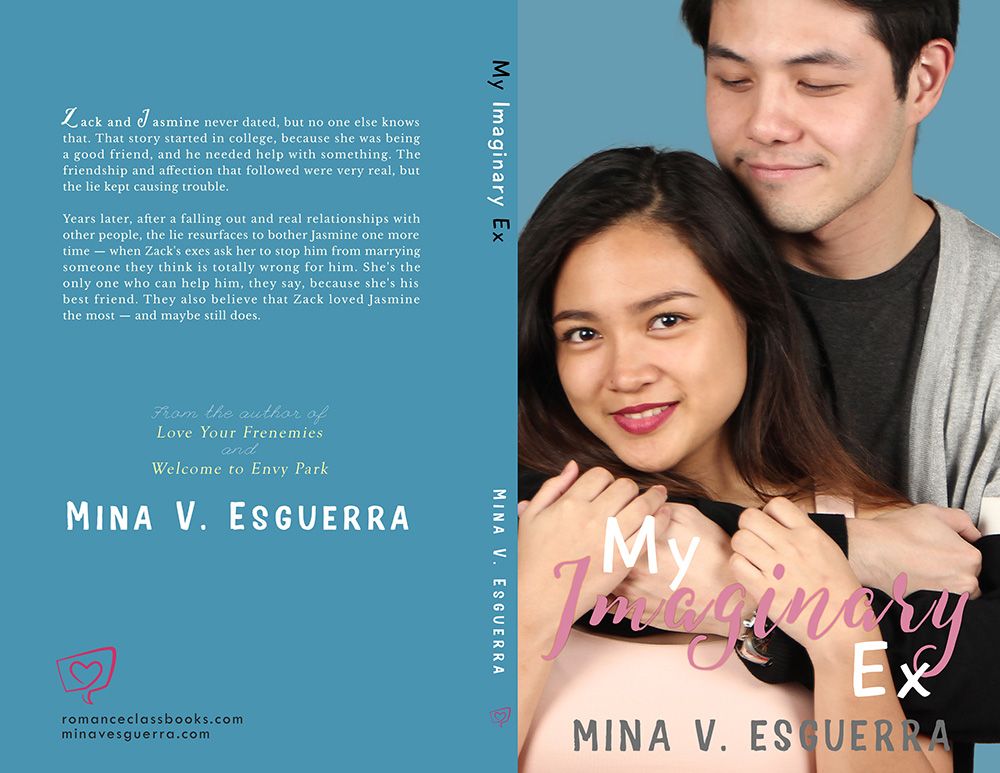 Zack and Jasmine never dated, but no one else knows that. That story started in college, because she was being a good friend, and he needed help with something. The friendship and affection that followed were very real, but the lie kept causing trouble.

Years later, after a falling out and real relationships with other people, the lie resurfaces to bother Jasmine one more time–when Zack’s exes ask her to stop him from marrying someone they think is totally wrong for him. She’s the only one who can help him, they say, because she’s his best friend. They also believe that Zack loved Jasmine the most–and maybe still does.

(This is a revised and expanded edition of My Imaginary Ex, the first book in the Chic Manila series. All books in the series can be read as standalones.)

Get the new edition ebook here, free if you have a previous edition: https://instafreebie.com/free/IR5Bq (code is Zack’s dream directorial project)

Here’s the 2017 author’s note, explaining what’s new in this edition:

I love this book. I’m proud of it. It’s the first one I wrote that was published, I wrote it relatively quickly, and I managed to keep track of all the timelines. I’m almost glad I didn’t stop to ask myself why craft it this way…I just ran with it. Some risks pay off.

When I wrote this, I was figuring out the kind of author I wanted to be, and how to write “chick lit” in English. I made decisions that have stayed with me years later, like writing mostly in English, using recognizable Manila settings. My characters would be sexually active, and responsibly so.

This 2017 edition is different from the first published edition in several ways, because some decisions I wanted to correct. Or adjust. I’d like to discuss some of those updates here.

• If you have any of the previous editions, and enjoyed the book, the story hasn’t changed, okay? But we had to trim several thousand words the first time, and as I went through this again I feel I was able to add back more context. More context, dialogue, and backstory should help make certain things clearer.

• I edited how I described the physical appearance of characters. Some specific descriptions remain, but to be consistent with how I write now, I removed a lot of what I no longer feel is necessary or proper.

• If a thing no longer exists, or the term for it has changed, I removed it or updated it.

• I extended the sex scene. Because I write those now. (I didn’t before.) Thank you, Marian Tee, for telling me to do this.

• And then, the most substantial edit: someone in this book calls Kimmy Domingo a bitch, and I removed that. I edited how other women talked about Kimmy, but tried not to alter Kimmy as she was. In this book she’s the villain, and that can’t be helped—that’s what the premise called for. I kept as much of her personality and her volatile relationships intact because it will matter, all of it, in the book where she’s the main character (Love Your Frenemies, Chic Manila #4). In my mind, she always had that backstory, and the events parallel to the version depicted here were always clear to me. I knew where she was coming from. That meant I understood Kimmy, but I wrote her using the limited POV of people who didn’t, and that led to some readers hating her. I’ve since decided to not be this kind of author, as much as possible. I’ve since tried to “make it up” to Kimmy by writing a full book about her, keeping her character and actions from this book consistent, and not watered down for sympathy.

Thank you for giving this book, and me, a chance. Thank you for the friendships that came into my life because of it.

By the way, Zack and Jasmine are happy right now. And forever.

#FeelsSoHot recap: Thoughts when sex scenes are read out loud

How to get a free copy of the #romanceclass textbook