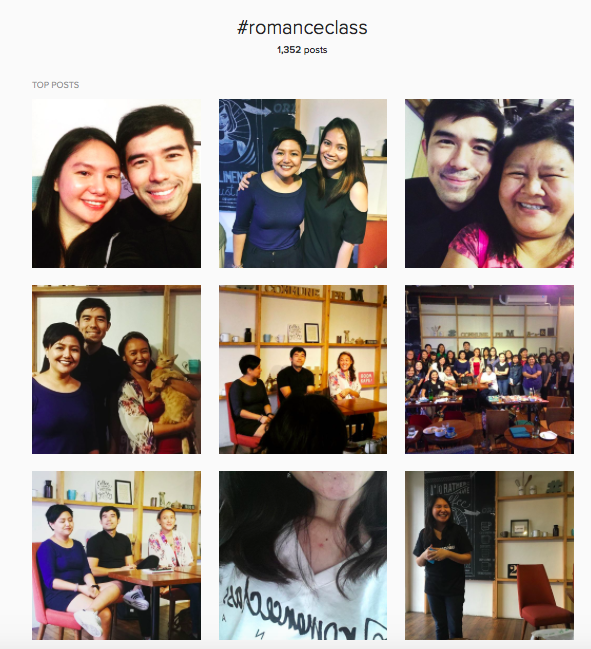 We had our first #romanceclass lecture and it rocked! Sorry for the pun! But it did.

On June 12, Independence Day here in the Philippines, the #romanceclass community met again to have our regular book discussion — except we’ve now turned it into a “lecture” series for writers or aspiring authors. What’s the difference? Well, when we used to meet to discuss books, I think the general impression was that you had to read the assigned books first, when the truth was, we didn’t care. We just wanted to talk about romance, books, and ideas for writing.

So starting with the June discussion, on rockstars, we changed it up. The “lecture” was now open to anyone, whether you’d read any of our books or not, but with a lecture fee. That fee was for the lecture, the snacks, and a bundle of ebooks you can choose to read (for research and fun!) or not, but they’re yours. If you read the books after the lecture and want to squee about them, we’re around and on social media anyway! 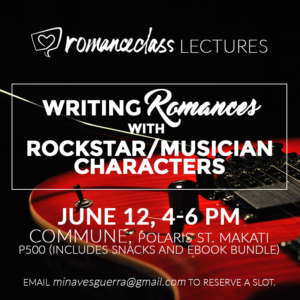 This was our invite, where we did not reveal who the guests were. I mean, we did tell some people, but if you only saw the poster and were interested, you probably didn’t know who’d be speaking. And you would have been in for a surprise, because we had an awesome panel.

For our first “lecture” on writing romance featuring musicians, we had solo artist Zsaris Mendioro, Champ Lui Pio of Hale, and Celine Fabie of the Ryan Cayabyab Singers.

They’re fun! It takes a certain person to willingly talk to WRITERS about ROMANCE, and these three stepped up and were so insightful — and also respectful. No names were dropped or reputations smeared. But we still learned a lot about how they work as artists, how they factor in relationships with their careers, and what it’s like to be in a relationship with someone like them.

Zsaris has been working in the music industry for years but she’s just started her own career as a performer. Champ Lui Pio is, I should say, maybe a generation younger than my first rock star crushes, but those who had a thing for him? I get it, completely. You’re not wrong. He is exactly the Love Interest your book should have, and I will one-click that damn book right now. Celine is an award-winning author, my roommate at the UP National Writers Workshop, and we bonded over many, many meals. When I found out that she’s also a singer I quickly invited her to be part of this.

Planning something special for the lecture was a good call, by the way, because we had to make sure it was worth the trip for our audience! Some people who attended came from FAR AWAY places (I think as far as Pangasinan to the north!). Commune in Makati was a great venue, and having this on a Sunday meant no traffic and a lot of early attendees. Not a problem at all!

Everyone who attended got these ebooks free:
Playing Autumn (by me)
Songs of Our Breakup by Jay E. Tria
Just for the Record by Six de los Reyes
The Real Score by Kesh Tanglao
Scandalized by Tara Frejas
A Dream is a Wish by Edith Joaquin
A Captured Dream by Ines Bautista-Yao

You should definitely listen to Zsaris Mendioro’s music now! Here’s the Spotify link.

Champ Lui Pio and the band Hale took a break, and he thinks the time apart made them better now that they’re back together. He said it in sexier language that I won’t repeat, because too sexy. I bought their 2015 album, get it here too.

Celine Fabie performs with The Ryan Cayabyab Singers. Like the page on Facebook to find out when and where they’re performing next.

So far it seems like the idea of holding the lectures every two months is doable, and we’re already planning the next one. Stay tuned!

Recap: My time as a fellow at the 55th UP National Writers Workshop