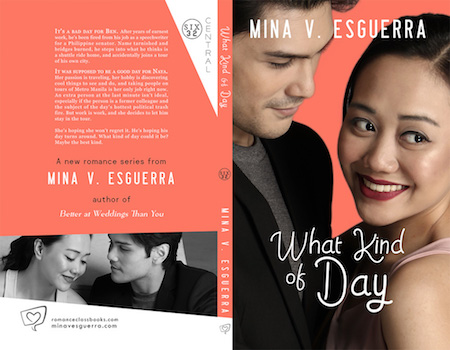 It’s a bad day for Ben. After years of earnest work, he’s been fired from his job as a speechwriter for a Philippine senator. Name tarnished and bridges burned, he steps into what he thinks is a shuttle ride home, and accidentally joins a tour of his own city.

It was supposed to be a good day for Naya. Her passion is traveling, her hobby is discovering cool things to see and do, and taking people on tours of Metro Manila is her only job right now. An extra person at the last minute isn’t ideal, especially if the person is a former colleague and the subject of the day’s hottest political trash fire. But work is work, and she decides to let him stay in the tour.

She’s hoping she won’t regret it. He’s hoping his day turns around. What kind of day could it be? Maybe the best kind.

Author’s Note (not included in the review copy)

My next contemporary romance series was supposed to have been set in the world of politics. I had outlined three books, started my research, named the characters. That was years ago, and frankly my head is in another place regarding elected officials. My heart too—so those books won’t be written anymore.

Then the idea for this book came and I was able to “save” three characters from that shelved series, and place them here. It’s a different world, so I changed them accordingly. While I do like to challenge myself when writing characters, and I’ve taken on the “unlikeable” in the past, I decided not to do so here. I won’t make this a space where truly terrible people are somehow redeemed. Ben, David, and Tana are good people; always have been, always will be. I didn’t use any of the real-world research here too, so if anything resembles real life, it’s unintentional.

That said, the tour of Manila can be recreated and made better even. If you’re ever in town, let’s eat somewhere.